(a) In the figure (1) given below, ABCD is a parallelogram. Points P and Q on

BC trisect BC into three equal parts. Prove that :

(b) In the figure (2) given below, DE is drawn parallel to the diagonal AC of the

quadrilateral ABCD to meet BC produced at the point E. Prove that area of quad.

(c) In figure (3) given below, ABCD is a parallelogram. O is any point on the

diagonal AC of the parallelogram. Show that the area of ∆AOB is equal to the area 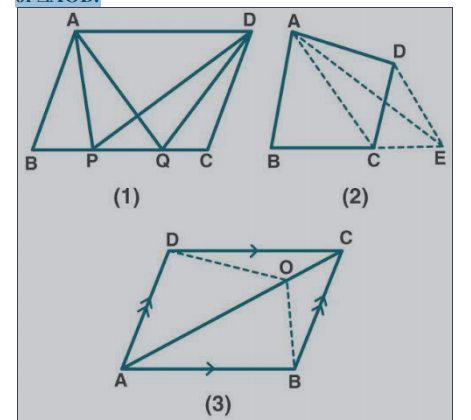 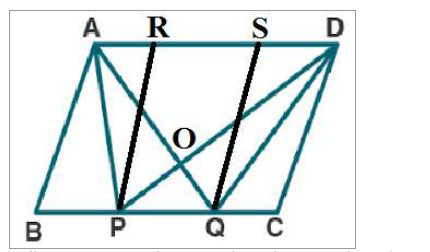 In ||gm ABCD, points P and Q trisect BC into three equal parts.

Firstly, let us construct: through P and Q, draw PR and QS parallel to AB and CD.

the same parallel lines AD and BC]

In the figure (2) given below, DE || AC the diagonal of the quadrilateral ABCD to meet at

Now by adding ar (∆ABC) on both sides, we get

In ||gm ABCD, O is any point on diagonal AC.

Let us join BD which meets AC at P.